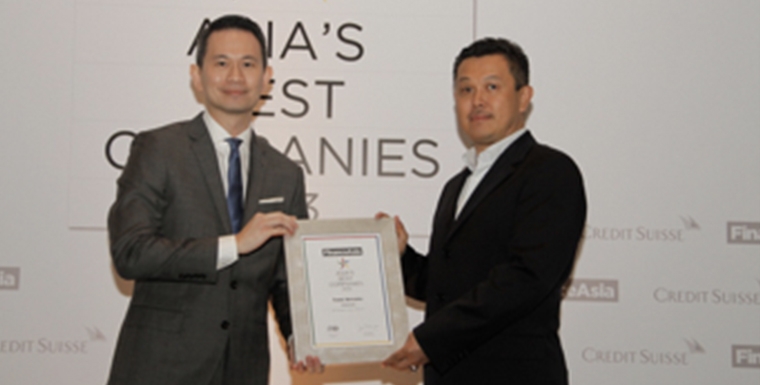 PT Tower Bersama Infrastructure, Tbk (TBIG) continues to add another award to our list of achievements this year, this time winning an award from Finance Asia magazine for one of the Best Managed Company 2013 categories in Indonesia. This award was presented by the Managing Director Head of Indonesia Coverage Investment Banking Department Credit Suisse, Robby Winarta and received by President Director TBIG Herman Setya Budi on July 4, 2013, in Grand Hyatt Jakarta.

Pak Herman Setya Budi said in his short speech, "It is an honor for TBIG to receive this award from Finance Asia as one of the Best Managed Companies in 2013. We will strive to improve our performance and prestige both in the industry as well as our role in advancing Indonesia's economy."

Competing against multinational and national corporations as one of the recipients of the Best Managed Company award shows that right now, TBIG and its performance has been acknowledged as one of the leading corporations in Asia.

Finance Asia noted that the 2013 respondents for the Best Managed Companies poll have a clear preference for specific corporations like telecoms, finance and property firms. TBIG is the only infrastructure corporation on this list and is competing against a number of the corporation from various industries in Indonesia.