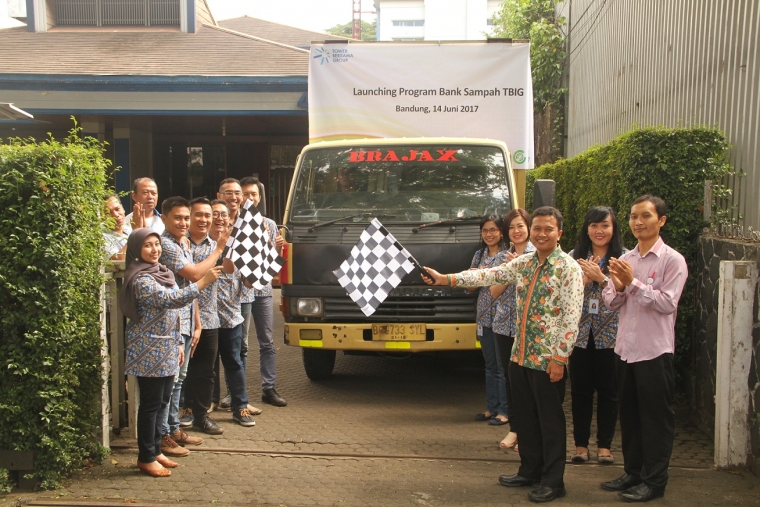 Initial collection at West Java Regional Office was marked with the signing ceremony of electronic waste handover and operational office to be disaggregated at waste bank managed by TBIG Partner. Implementation of waste bank programs will be implemented in some operational areas in West Java, South Sumatra, East Java, Central Java, North Sumatra and Makassar

Bandung, 14 June 2017 - PT.  Tower Bersama Infrastructure Tbk (“TBIG”) launched its newest CSR initiative in the environmental field by rolling out the TBIG Waste Bank program in collaboration with Filantra – a non-profit organization engaged in social work. Initial collection was carried out in West Java Regional Office (RO) and marked with the signing ceremony of electronic waste handover and office operations to be disaggregated at the waste bank managed by implementation partner of TBIG.

The signing of the Minutes and the first release of the waste bank fleet was carried out by Regional Manager of TBIG West Java - Suhairah Safrianti on Wednesday, June 14, 2017. "The implementation of this program is aimed for better waste handling so it can have a positive impact on the environment. In addition, the waste bank program also has aspects of community empowerment that makes it has more benefits," she explained after the launch event.

In a press release issued by the company, Chief Business Support TBIG, Lie Si An stated that the implementation of the waste bank is as our commitment to run the company's operations responsibly. "Through this program, garbage handling in regional offices can be organized better and meet the principles that apply in a standardized environmental management system, such as reuse and recycle," he explained, adding that waste bank was chosen because of the community empowerment consideration.

Lie Si An added that in 2017, as the initial phase, the concentration of waste collection will be focused in five cities in Indonesia, such as Jakarta, Cirebon, Prabumulih, Kediri and Makassar. "For the initial phase, we have just implemented this program in our operational areas. The new in six areas are West Java, South Sumatra, East Java, Central Java, North Sumatra and Makassar," he said, adding that it is likely that the program will run nationwide throughout the company's operational areas.