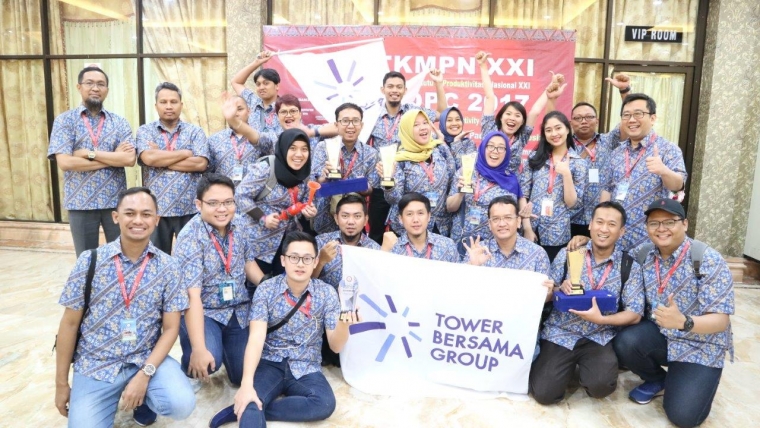 In the event of the National Quality & Productivity Convention (TKMPN) 2017, TBIG presented its five best innovations and succeeded to collect two platinum and three gold awards.

TBIG Chief Business Support Officer, Lie Si An stated that the innovation presented in TKMPN is an innovation that has been applied in the company’s operations. “We always encourage employees to innovate in developing new ways to produce effective solutions for the company. Every year there is always something new that comes from our employee, “ he explained.

Meanwhile, in a separate occasion, Herman Setya Budi, the President Director of PT Tower Bersama Infrastructure Tbk. appreciated the success of TBIG contingent in TKMPN 2017. “Innovation has become the DNA in TBIG. All employees are always given motivation to create effective innovation to improve productivity and services for our customers,” he said.

And below are the 5 teams managed to achieve the following predicate:

TKMPN is an annual event held to calibrate the quality improvement made by companies at the national level.

This year the total number of participants in attendance was 2,160 people from 141 companies including state-owned and private companies such as Semen Indonesia Group, Pupuk Kaltim, PT KAI, Toyota Motor Manufacturing Indonesia, Astra Group, Krakatau Steel, BCA and others. In this event, each participant demonstrates the success of the quality improvement and productivity works of individuals/groups with award ratings ranging from Bronze, Silver, Gold, Platinum and Diamond.