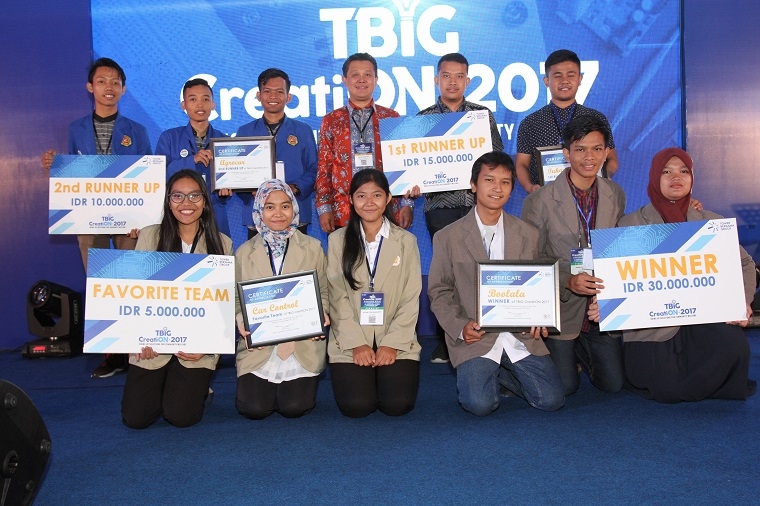 TBIG CreatiON is a nationwide application and IoT competition for university students to provide a platform for young generation to channel their creativity in creating creative and effective solutions that are useful to the community.

Jakarta, 9 November 2017 - PT. Tower Bersama Infrastructure, Tbk., ("TBIG") held TBIG CreatiON 2017, which is an application competition and IoT for university students. The nationwide event with theme "Bring Up Solutions for Community Welfare", is aimed at providing a platform for young generation to channel their creativity to create creative and effective solutions that are useful to the people of Indonesia.

Out of 16 teams that qualified for the final round, were selected 3 main winners and 1 favorite winner as follows:

TBIG CreatiON was conducted from 11 July 2017 and divided into several stages: proposal submission and selection, and ending in the final judging stage on 6 and 7 November 2017.

Chairman of the organizer Lie Si An, who is also Chief of Business Support Officer of PT. Tower Bersama Infrastructure, Tbk., expects that this activity can produce solutions which can provide benefits to the wider community. "This is the first time we run such competition, and there are so many creative ideas produced by the young contestants," he explained. He also said that the jury team consists of internal companies, practitioners and experts in education and industry ICT in the country. "The composition of the jury from within the company and ICT practitioners and academics outside the company is aimed at making the assessment possible to cover all aspects needed in developing the ideas and ideas of the participants," he added.

Chairman of Jury TBIG CreatiON 2017, Gusandi Sjamsudin assess the IoT solution and the application presented by the finalists is quite diverse and represents the needs of people in big cities and rural areas in Indonesia. "But in the end the best has to win. I hope this kind of competition can be held again in the next year and can attract more participants" he said.

Meanwhile, President Director of PT. Tower Bersama Infrastructure, Tbk., Herman Setya Budi explained that Tower Bersama is committed to contribute in the progress of the ICT industry in Indonesia. "Through this event we hope to find qualified talents that will be one of the pillars supporting the progress of the ICT industry," explains Herman while adding that Indonesia has a talented young generation with great potential to develop. "We are confident that this nation has creative talent and great potential to be developed."

PROFESSIONAL BOARD OF JURY