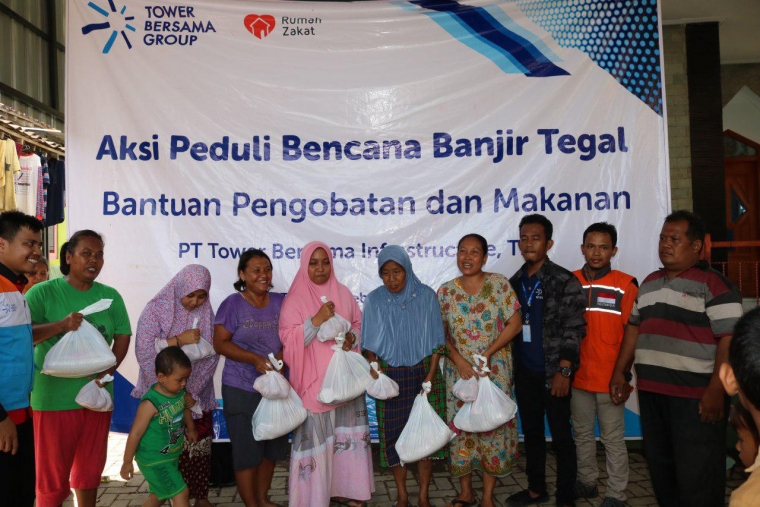 Food aid and free healthcare services were provided to 150 families by TBIG for two days in Tegal. Besides that, in Pekalongan, TBIG together with PKK Team conducted maternal and child health campaign to support the local government in reducing mortality rate of mother and children in the Regency.

On 17 and 18 February one TBIG Mobile Clinic (“Monik TBIG”) came to Adiwerna sub-district, Tegal regency, Central Java to provide healthcare services to hundreds of flood victims there. During the occasion TBIG handed over medical and food aids to 150 recipients.

Chief of Business Support TBIG,  Lie Si An, said that the company will keep monitoring disaster prone areas in order to deliver quick response for vulnerable spots within company’s operational areas. “The CSR activity is collaboration between our Regional Operation and SCR Department,” he says and then added that Monik TBIG will be kept ready until the condition is safe.

Several days before the activity in Tegal, on 14 and 15 February in Pekalongan, TBIG together with Pekalongan PKK Team conducted a socialization of maternal and child health to mitigate maternal and infant mortality. Monik TBIG provided people in two sub-districts: Kajen and Karanganyar.

The two-day activity was attended by the head of Pekalongan PKK Team, Mrs. Mufah Asip Kholbihi who are also the initiator of maternal and infant mortality mitigation program.

Meanwhile, the President Director of PT Tower Bersama Infrastructure, Tbk. Herman Setya Budi said that TBIG will keep maintaining its commitment in corporate social responsibility according to the regulations. “The CSR programs directly targeting the community are the company’s contribution to build better communications with stakeholders in our operational areas.” He also explained that the company’s CSR implementation always refers to the principles of ISO26000 standards.