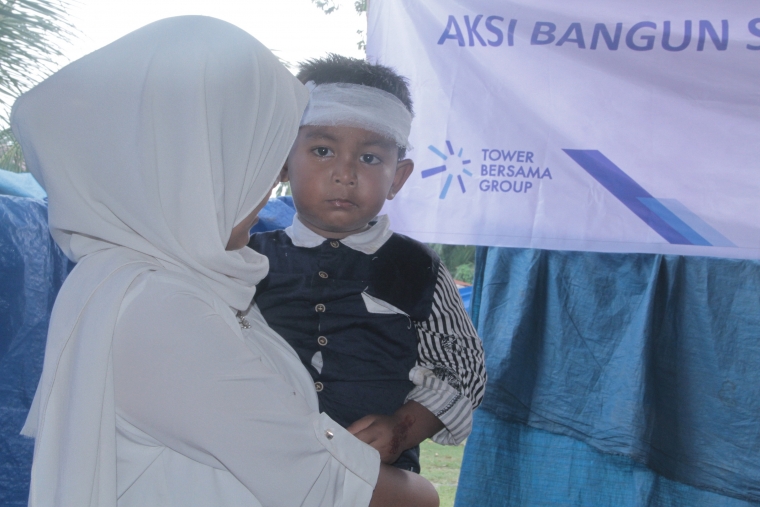 Pidie Jaya, Aceh, 15 Desember 2016 – PT.Tower Bersama Infrastructure Tbk. sends its disaster response team to the affected areas to alleviate the suffering of the earthquake victims in three districts in Pidie Jaya Regency, Nanggroe Aceh Darussalam. Trienggadeng, Mereudeu and Bandar Baru districts are the worst affected by the 6.5 Richter scale-earthquake that occurred on 7 December.

Herman Setya Budi, the President Director of PT. Tower Bersama Infrastructure, Tbk. (“TBIG”) said that the management and employees feel sorry and empathize with people in Pidi Jaya because of the earthquake disaster.

“When we heard about the earthquake, we took immediate action to send our disaster response team to the affected areas for preliminary identification. One day post the earthquake, we were able to provide humanity services in Meureudu district. And entering the second week, we have reached three districts which suffer the most from the disaster,” he said.

“Our disaster response action includes logistic aids, healthcare services and trauma healing for children. Psychologically, those children are affected by the earthquake. So we conduct entertainment sessions for them such as storytelling, games and free snacks to reduce their trauma,” Herman added.

Herman explained that all employees both in Head Office and Regional all over Indonesia participated in collecting donation. “We encourage employees to involve in company’s CSR programs and we really hope what we have done could ease the burden of earthquake victims.” he said. Besides that, TBIG also invited its partners to take part in this humanity action.

Meanwhile, the Regional Manager of PT. Tower Bersama Infrastructure, Tbk., Chandra Novyan Nurfahmi explained that TBIG’s disaster response team will continually provide humanity services for two weeks. “We are focusing in three districts that have the worst effect from the earthquake in Pidie Jaya. Besides sending the Mobile Clinic (Monik), we also establish ‘soup kitchen’ that serves around 500 people daily in Gampong Deah Teumanah for one week.”

Chandra who also joins the disaster response team explained that the humanity aids will be continually provided until the next several days. “We have come to the affected locations since 8 Desember and plan to send aids in two weeks.” Chandra explained that in performing these aids, the team also works together with gampong (village) staffs, local Health Department and other people elements/organizations.

The head of Deah Teumanah Gampong (village), Muhammad Ali said that only in his village, there are 1.039 lives lost their homes. “About 237 houses are destroyed. Almost half of them are badly damaged and can no longer be habitable. There are houses that have been razed to the ground. Same condition happens in other villages.”

In different occasions, Eradi Wahyudi, head of Mapeudeuk village in Trieng Gadeng district explained similar condition. “Our people are afraid to sleep inside their houses because aftershocks are still happening. During night, they sleep under the emergency tents.” Eriadi said that in his village, there are 118 houses damaged. “There are 780 people in total who lost their houses.”